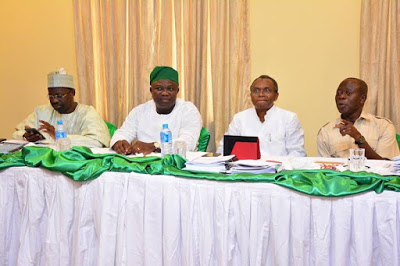 The Federal Government has appointed two reputable international audit firms – KPMG and PricewaterhouseCooper (PwC) – to examine the books of the Nigerian National Petroleum Corporation (NNPC) and other revenue generating agencies.

They are to carry out a forensic audit of the accounts of the NNPC, Federal Inland Revenue Service (FIRS), Nigerian Customs Service (NCS) and other revenue generating agencies.

Governor Adams Oshiomhole of Edo State made the disclosure Thursday after the meeting of the committee of five set up by the Vice President Yemi Osinbajo-led National Economic Council (NEC).
The committee, which is chaired by Mr. Oshiomhole, has governors Ibrahim Dakwambo (Gombe), Nasiru El-Rufai (Kaduna) and Udom Emmanuel (Akwa Ibom) as members.

The Edo governor said choice of the firms was to allow for professionalism.

He said that the revenue generating agencies were supposed to remit their revenues to the Federation Account in line with Sections 80 and 162 of the 1999 Constitution.

Oshiomhole said: “Having looked at the size of the assignment and the issues that have been raised, we are convinced that we need a professional approach. And so, we have decided to appoint two audit firms including KPMG and PWC to carry out a forensic audit of all the agencies under reference and to establish all the facts that we need.

“And at the end of the exercise, government will decide what to do with the findings of the audit firms. Like we said last week, we are doing this first because we are sitting governors. Even if we are not sitting governors, some of us are not professional accountants.

“We expect that the audit firms will carry out a professional work. We are convinced they have what it takes to do it and their findings will help government first to lay out new rules to ensure that the laws of the land are complied with. And if anything has gone wrong, identify who has done what. And then we take it from there”.

Mr. Oshiomhole pointed out that the auditors were not given a time-frame within which to complete the task but that they had been told to be fast and thorough without compromising standards.

While disclosing that KPMG declined to do the auditing when approached by the immediate past Goodluck Jonathan administration as the political environment was not conducive, he said PwC which agreed to do the job then confirmed that some organisations refused to open their books.

“There is room now to do a more thorough audit because we now have a completely new political environment. We have a president that is absolutely committed to transparency and one that has demonstrated enormous political will to ensure that these public institutions are run, not only in compliance with the laws of the land, but they are run on the basis of international best practices.

“I think the audit companies, this time around, will have no excuse. We expect all those involved to cooperate. This is not about finding out what is right, or wrong, it is about making Nigeria work for the benefit of Nigeria.

“And we have to bear in mind in other climes governments are not run on the basis of collections from crude oil, government regardless of their colour, or political affiliation. They are funded exclusively through taxes.

“And so if you have tax generating agencies that are not remitting money, government can’t run like that. So, on the long run, Nigeria has to live on taxes.

“First, it is not about yesterday, it is more about tomorrow. Nigeria can’t continue with business as usual. And that is why ‘change’ is the word in President Buhari’s promise to Nigerians”.

On whether his committee has the power to appoint the two audit firms, Gov. Oshiomhole said it derives its powers from the mandate given to it by the NEC.

The government agencies at the committee’s session yesterday included: the Nigerian Maritime Administration and Safety Agency (NIMASA), Central Bank of Nigeria (CBN), Department of Petroleum Resources (DPR), FIRS, Security and Exchange Commission (SEC), NCS, Ministry of Finance and the Office of the Accountant-General of the Federation.