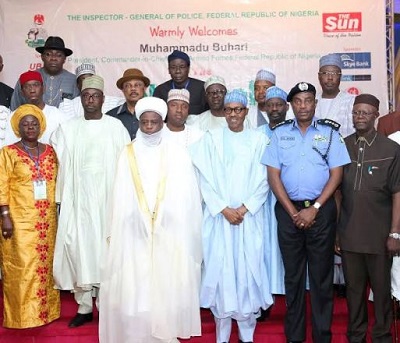 As part of efforts to address the rising wave of crime and criminal tendencies among youths as a result of massive unemployment in the country, President Muhammadu Buhari has said that the federal government is putting in place appropriate framework that will facilitate the employment of 100, 000 Nigerians into the Nigerian Police Force.
This is in addition to government’s plan to establish properly trained and equipped federal anti- terrorism, multi-agency task force that will effectively address the challenge of Boko Haram and any form of insurgency in a sustainable manner.
Speaking at the one day National Security Summit organized by the Nigerian Police force and Sun Newspapers in Abuja with the theme ‘Community partnership approach to internal security and crime management’ Monday, the president said, “In order to further strengthen the security of the public space, consideration is being given to the expansion of the CCTV Monitoring System across major cities and towns in the country while police accountability mechanism will be strengthened”.
According to Buhari, “The need for community input to policing and crime management in Nigeria has even become more imperative considering our current national security challenges in which kidnapping, armed robbery, murder, transnational crimes, terrorism and other organized crimes have evolved to threaten our national values and developmental strides.
“While it is understandable that unemployment, illiteracy, radicalization, negative peer group influence, substance abuse and erosion of family and moral values are social factors that underline criminal tendency, the reality remains that the task of addressing these challenges is that of parents, community and the state”.
Disclosing that efforts are being made to enhance the operational capacity of officers of the Nigeria Police Force through tailor made training programme that will give them the right civil orientation in their roles as guardians of the constitution, the president said his administration will encourage the development of state-level community policing under a model that will integrate members of the community to policing functions at the grassroots level.
Commending the leadership of the police force for feeling the pulse of Nigerians by ordering the dismantling police road blocks, which have consistently constituted a dark side of policing and object of discord between the police and the citizenry, Buhari said the initiative of the IGP to introduce the “Safer Highway Motorized Patrol Scheme” and deploy 555 patrol vehicles along all major highways to fill the void created, has reassured the citizens of their safety and security.