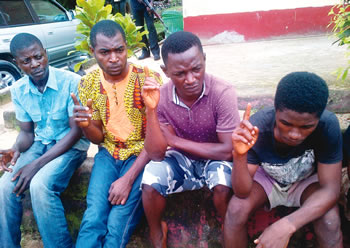 One person has been reportedly killed following a clash between members of Vikings and another cult in a night club in Ogoja, Cross River State. The fight was said to have started when a member of Vikings disagreed with a rival colleague who was wearing red socks. The state Commissioner of Police, Mr. Henry Fadairo, confirmed the incident while parading the 10 suspected cultists and four kidnappers at the state police headquarters in Calabar. Fadairo told Southern City News the suspected cultists were arrested in the premises of a club house known as ‘Memories Flavour’ in Ogoja on August 2, 2015.

The police commissioner also said the police acted on information that there was a serious civil unrest at Ogoja following the development at the night club. He said, “On the strength of the information, the police swiftly moved to the scene to discover that it was a fracas between two rival cult groups. “Investigation by police revealed that one Smart Umaru, a Vikings member, allegedly stabbed one Emmanuel Sunday a member of another group to death. In the course of the investigation, we arrested 10 suspected cultists. Fadairo gave the names of some of the arrested cultists as Emmanuel Igwe, Perry Onuyi, Emmanuel Agbada, Agom Joseph and Mohammed Liman.

While noting that investigation was still ongoing, Fadairo said the arrested suspects would be charged to court as soon as the courts were opened. Narrating the probable cause of the death of their colleague, whose name was given as Emmanuel Sunday, an arrested member of , Leo Agida (20), said he gathered from his fellow cultists that it was because the deceased was wearing red socks. “They said it was because he (Sunday) was putting on red socks and a member of Vikings tried to force him to pull off the socks and in the process fight started,” he said.

A 17-year-old boy, who said he was of the Vikings cult group, Emmanuel Igwe (Ebonyi State), gave details of the encounter, saying it was true that his cult member stabbed Sunday to death during an encounter. Igwe said, “I was just about entering the night club when I saw a Vikings colleague fighting. I didn’t go near them, I just watched from a distance. I saw that he stabbed the boy three times. I didn’t know what he used but I saw that the boy died. I later got to know that he (the deceased) was a boy known as Emmanuel Sunday.”