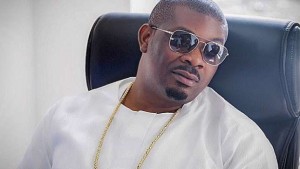 In a new chat Don Jazzy had with City People magazine, the ace music producer and boss of Mavin Records said that the so called ‘issue’ he had with his former business partner D’banj was created by fans of the Mo’ Hits label and the media also.

“I keep saying that, the problem  you guys think we had was caused by both the press and our fans, because we were alright. D Banj is working, I am working, we can meet up. We can gist, laugh and whatever” Don Jazzy told the soft sell magazine.

Stressing that there is no beef between the two of them, Don Jazzy said there is nothing stopping him from doing a song with D’banj.

He however said his hands are full with Mavin artistes to produce music outside his label.

“Yes and no, I am not losing anything. I have many artistes at hand right now. I’m a producer; my work is to look for artistes. If I want to sign more, I will. There is no doubt that he is a huge and successful entertainer, but then there is no glory in actually working with huge people. I like bringing up people” said Don Jazzy when asked if he misses D’banj.