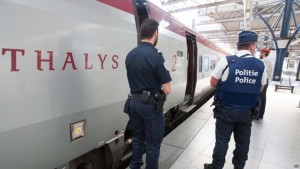 Calls for tighter security on the railways are to be discussed by European ministers and officials, following the foiled attack on a high-speed Amsterdam-Paris train last week.

Passengers overpowered a heavily armed man and pinned him to the floor. French prosecutors have filed charges against Ayoub El-Khazzani, 25. UK Home Secretary Theresa May is among those attending the talks in Paris. France is understood to want tighter security measures.

Questions have been raised about how someone was able to board the train in Brussels carrying an assault rifle, 270 rounds of ammunition, a handgun, a box-cutter and petrol.

Saturday’s meeting will include ministers from France, the UK, Germany, Italy, Spain, Belgium, Luxembourg, the Netherlands, and Switzerland.