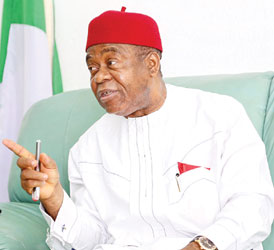 Two groups, a non-governmental organisation, For Sure Group; and a socio-cultural organisation, Ibeku Elders of Thought, Northern zone, have raised the alarm over alleged plots by those they described as faceless groups to tarnish the image of Senator Theodore Orji.

The groups’ leaders, who raised the alarm at a joint press conference in Abuja yesterday, also confirmed media reports suggesting that Orji, who is the immediate past governor of Abia State, has a pending petition bordering on corruption against him before the Economic and Financial Crimes Commission (EFCC).

Chairman of the FSG, Uduakobong Kanico, said Orji would be remembered for his service-oriented disposition to governance when he was governor of the Southeastern state, hence the campaign of calumny against him must stop.

“The much I saw in Umuahia the state capital and Aba have given me the courage to speak out. There should be limit to political gimmicks”, he said.

Kanico noted that petitions to EFCC are confidential documents, adding that a situation where such is published in a particular newspaper that has been on war path with Orji, is objectionable and orchestrated at embarrassing the Senator and his family.

“By right, this case, if there is any, should be sub-judice and therefore not for public opinion. This is like finding somebody guilty before judgment”, Kanico said.

The chairman of the Ibeku Elders of Thought, Chief I.N. Nwankwo, pointed out that: “Oddly enough, the publication focuses only on 2007 to 2015, what about other preceding years?”