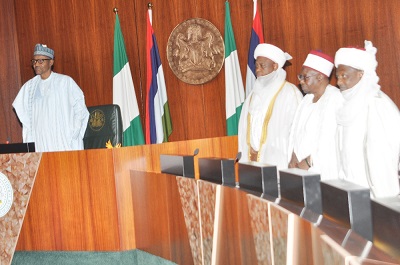 President Muhammadu Buhari has accepted the voluntary offer of services to 2015 Pilgrims to Saudi Arabia by the leadership of the Muslim community under the Sultan of Sokoto, Alhaji Sa’ad Abubakar III.
This is contained in a statement issued in Abuja on Sunday by the President’s Senior Special Assistant on Media and Publicity, Malam Garba Shehu.
The president noted that the Muslim community would partner with the National Hajj Commission of Nigeria’s Ad-hoc Committees to cater for the general welfare of pilgrims for the duration of the pilgrimage.
The Sultan is represented by a committee of Emirs under the Emir of Kano, Alhaji Muhammadu Sunusi II.
The statement said the president also noted that the offer did not contradict his directive that Federal Government’s Delegation for the 2015 Hajj be suspended in line with the cost-saving measures of his administration.
“In accepting this voluntary offer of service, the President made it clear that there will be no government funds involved in the mission by the respected Emir.
“Government will also not name any members into the Emir’s delegation
“The President assured that all measures had been taken to ensure that the well-being of Nigerians on the holy pilgrimage is well managed by the various ad-hoc committees”.
It named the committees as medical, accommodation, transport, logistics, information and publicity, aviation, tour operators and security.
“They are generally to assist the Commission in ensuring hitch-free Hajj operation”.
The statement quoted the President as commending the Emir for adding this responsibility to his own personal Hajj plans.