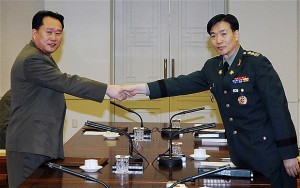 High level officials from the two Koreas are holding talks in a bid to ease tensions, after the passing of a North Korean-imposed deadline for the South, to halt loudspeaker propaganda broadcasts across the border.

The South Korean presidential office confirmed on Saturday that a meeting is going on, between the country’s national security director, Kim Kwan-jin and North Korea’s top military officer Hwang Pyong So.

Hwang is considered by outside analysts to be North Korea’s second most important official after supreme leader Kim Jong Un. They are joined by the two countries’ top Korean unification officials.

Al Jazeera’s Harry Fawcett, reporting from Injimgak near the South Korean border, said the meeting started at around 0930 GMT at the Demilitarised Zone (DMZ) village of Panmunjom.

“The question now is, can they find some common ground to diffuse the tension,” our correspondent said.  South Korean troops were on maximum alert on Saturday, with North Korea threatening to go to war unless the deadline was met.