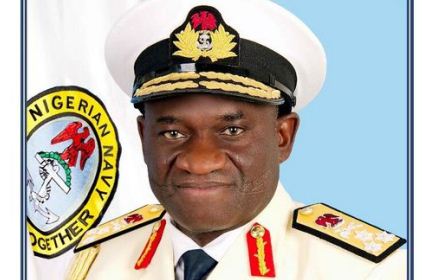 The immediate past Chief of Naval Staff (CNS), Vice Admiral Usman Jibrin, yesterday said Boko Haram got explosives and other weapons with which it uses to terrorize Nigerians through theft and purchases from local shops.
The ex-naval chief made the claim while speaking with journalists shortly after his pulling out ceremony at the Naval Base, Apapa in Lagos.
While urging Nigerians to provide security agencies with information to find out where the terrorists manufacture their Improvised Explosive Devices (IEDs), Vice Admiral Jibrin urged those whose wares were stolen to report to security agencies.
He said: “Terrorists are among us; they are very difficult for security agencies to identify without intelligence. Since they are among us, the source of materials used for their devices are sold by Nigerians and some from shops belonging to Nigerians.
“To that end, one expects that owners of stolen equipment or those who suspicious equipment are bought from should report to the security agencies, their confidentiality is guaranteed because no one will disclose the source of the information.
“I am appealing to Nigerians to support President Buhari and the security agencies so that they can do their jobs well.
“Believing in the effectiveness of intelligence gathering, Nigerians must provide the intelligence for security forces to be able to identify would-be bombers and suicide bombers; as well as monitoring to the extent that security forces can unravel where terrorists make their IEDs”.
Rendering account of his stewardship as CNS, Vice Admiral Jibrin said many vessels were seized for oil theft and illegal bunkering, adding that naval personnel found culpable were tried and dealt with.
He said: “My career as a naval officer spanned through the murky streams, rivulets, rivers and seas for more than three decades and anchored at the Naval Headquarters.
“It would be recalled that on my appointment as the CNS, ex-President Goodluck Jonathan directed that the Navy should take steps to stop oil theft and illegal bunkering in our maritime environment.
“The ex-President noted with dismay, the alleged involvement of security agencies, including the Navy in oil theft and illegal bunkering.
“This was taken as a presidential directive with no option but to decisively deal with the surge. This ultimately led to my decision to declare war on oil thieves and illegal bunkerers including pirates, which was fought through actions by the Navy.
“High premium was placed on training, motivation of personnel and operational availability of assets in order to evaluate the ability of the NN to perform its roles.
“Under my 18-month watch, the number of Regional Maritime Awareness Capabilities (RMAC) sites were increased from seven to 10, through the establishment of new sites at BRASS, FORMOSO and Central Naval Command (CNC) headquarters at Yenegoa for enhanced anti-crude theft operations”.
“I am glad to note the increased success recorded by the Navy in its policing operations. In collaboration with the Joint Task Force Operation PULO SHIELD, the Navy seized many vessels and arrested their crew from January 16, last year to July 14, this year”, he added.
The retired CNS said the strategy of not releasing any seized vessel until decided otherwise by the courts assisted in checking crude oil theft and illegal bunkering just as he advised that to completely eradicate the vices, government agencies empowered to prosecute offenders must expeditiously bring offenders to justice.
Jibrin said: “There is also the need for a legal review that will enable the NN prosecute maritime criminals or offenders.
“In addition, crude oil from seized vessels should be immediately evacuated by the Directorate of Petroleum Resources (DPR) to the refineries for local use after due documentation among appropriate agencies.
“Navy personnel should be involved at the point of loading for proper supervision and accountability”.
The event was attended by former service chiefs, top civil servants, officers of the Nigerian military, police officers and the Navy’s top brass led by the current Chief of Naval Staff, Rear Admiral Ibok-Ette Ibas, who was earlier today decorated as Vice Admiral.