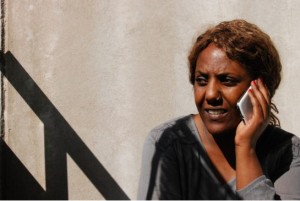 One day in 2010, the woman with the red fingernails received the first call. She was standing in her kitchen when her white cellphone rang. The display showed “00888” — the first five digits of an unknown number. When the woman answered, she was assaulted by shrieks. Four hundred and twenty-five Eritreans were drifting in the Mediterranean. The ship was leaking; water was creeping up the walls.

One of the passengers had the telephone number of Meron Estefanos and entered the 13 digits into a satellite cellphone, the one that people smugglers give refugees for emergencies. Estefanos’ telephone began to ring. It was a nightmare, she recalls. “This panic, the people screaming into the receiver: ‘We’re dying, our life is in your hands. Do something!’”

Today, the 40-year old woman with the red fingernails is sitting on a plastic chair in her kitchen, the same place she received the call five years ago.

“At that time I hardly knew how to handle the situation. First I called the Italian authorities. They told me: ‘Call Malta!’ I called up Malta. They told me: ‘Call Italy!’” Seven hours passed until the 425 people knew they would survive, she recounts. The Italian Coast Guard rescued them. For Estefanos, it was the beginning of a long acquaintance with the ominous numerical sequence 00888, which indicates a call from a satellite mobile on the Mediterranean.