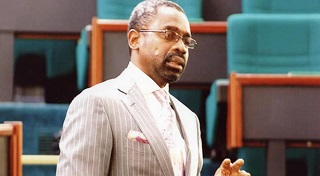 Majority Leader of the House of Representatives, Hon. Femi Gbajabiamila, has dispelled reports that he lost his bid to become Speaker of the House because the National Leader of the All Progressives Congress, Asiwaju Bola Tinubu, was his godfather.
Gbajabiamila made the clarification during a rally held in his honour by his supporters in Lagos on Saturday.
The majority leader, who lost to the current Speaker, Mr. Yakubu Dogara by eight votes, was said to have lost because some APC members in the House wanted to wean themselves of Tinubu’s influence.
However, Gbajabiamila, who noted that many people were against the APC leader, said he did not have any regrets having his (Tinubu) support.
The lawmaker, who represents Surulere 1 Federal Constituency of Lagos State, said those criticising Tinubu today should not forget that without him, there would be no APC.
He said, “The election we had for the speakership is none like we have ever had in the history of Nigeria. We all believed that the Speakership of the House of Representatives was coming to Surulere. It was a done deal: signed, sealed and delivered.
“But God knows how he does his things. We all prayed and I believed that God heard but did not accept it. And once God does not answer to a prayer, we have to thank him all the same because he will have a reason for doing so but man will not understand.
“Some say it was because of Tinubu but you forget that without Asiwaju there could not be an APC. Without him, many of us would not have been where we are today. Some said it was because of what he did to Mulikat Akande four years ago.
“People said all sorts. But they forgot that there is God. We fought and we lost Speakership by eight votes and after that was the issue of the House Speakership. I want to particularly want to thank the President, the APC leadership and the 80 to 90 per cent of our members in the House that stood by me”.
The majority leader also defended President Muhammadu Buhari, who has been nicknamed ‘baba go slow’.
While addressing his supporters, Gbajabiamila said Buhari’s government was the fastest, in terms of implementation, in the history of Nigeria.
He said, “Many are saying the APC and the President are moving slowly but if you look at the track record of President Buhari in the last three months, there has never been a faster government in Nigeria from what they did in their first three months, not one. Except those who do not know.
“Before people make statements, they need to do a lot of research and work. I am waiting for people to show me one government in the history of Nigeria that has done as well as this government has done in the last three months”.