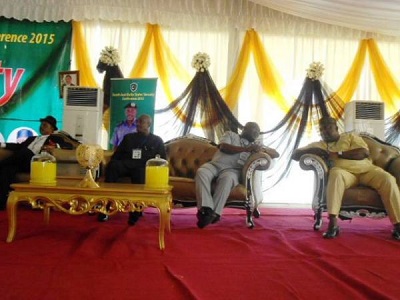 The Inspector General of Police, IGP Solomon Arase declared yesterday that the force is poised for battle with kingpins of armed robbery, kidnapping, cultism and other social vices in the Southeast and Delta state axis.
He said the police will collaborate with governments at that level to deal with crime syndicates in the area.
The IG made the pledge in Awka, the Anambra State capital at a South-East/Delta State Security Conference 2015 with the theme “Security, Bedrock of Governance.’’
The crime syndicates, according to him, are operating highly organized networks, which must be crushed.
He was confident that the conference would identify ways to replicate the successful security concept being employed in other climes.
He also called for sustainable regional security framework, joint operation, funding and the political will by the various levels of government within the region, to make the approach work.
Arase also lauded the host Governor, Willie Obiano, for organising the conference.
Earlier, the governor said the time has come to stand up to all the crimes and criminalities that have stunted economic growth for decades in the region.
Describing security as the panacea for rapid economic growth and development, Obiano noted that mankind’s greatest worry has always been how to ensure a safe and secure world.
“Our world has never been an easy place to live in. Speaking about mankind’s never-ending struggle for a better world, the great French philosopher, Jean-Jacques Rousseau, the author of The Social Contract, observed in 1762 that ‘man is born free, and everywhere, he is in chains’. Ladies and gentlemen, man is in a different kind of chain today.
“The pertinent question we must ask ourselves is how long? How long shall the South East and Delta State and other contiguous states bear the brunt of brazen criminality and meaningless brigandage? How long shall our people’s well known enterprising spirit be driven away to nourish distant lands while our homeland wallows in squalor?” Obiano lamented.
He recalled that there was a time Anambra State experienced waves of gang rules in the commercial city of Onitsha that were so dominant that constituted authorities felt helpless under their brutal onslaught.
“The story is very much the same across the states in the region and Delta State. It may vary in degrees from one state to another but this region has had a most troubling crime history for far too long. The time has come to wipe this dark history away!” he said.
In his remarks, Governor Ifeanyi Okowa of Delta, described security as the “bedrock of good governance”.
On his part, Governor of Abia State, Dr. Okezie Ikpeazu, asked investors from the region to come home and create jobs to reduce the prevalent crime in the area.