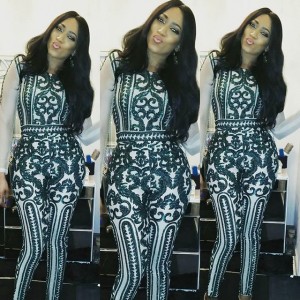 In a recent chat with Vanguard, Nollywood actress, Rukky Sanda, opened up on her career and other personal things.

Rukky says she has multiple personalities that take care of all her businesses.

Hear her, ‘I’m an interior designer, scriptwriter, actress, director and producer, and I’ve been doing this for about 10 years now. I think I’m just different at different times. It’s a blessing actually. I love writing and listening to stories. I also love being involved in every aspect of my movies; I can edit and do a couple of other things. I don’t like being ignorant about any part of movie production.’ She veered into movie production after appearing in only three movies, and we wanted to know why. She dnt answers, ‘For me, it was more of a business decision, because at that time, it wasn’t like actresses were being paid well. I’ve always been a business person, and I wanted to invest in the business aspect of Nollywood. I acted in my first movie in 2004, and I produced my first film in 2005.’

But did she actually make money from that movie? She smiles wryly in response, ‘As a matter of fact, I still have people owing me till date. Some of the people I worked with even went behind my back to mass dub and sell the movies.’

On the lessons she has learnt, she talks like someone who has walked through the valley of the shadow of death and survived. With a bold face she says, ‘In the beginning, it was more of a business decision to just make money, but now, I’ve grown into it, and I actually have a passion for the art of movie production; I just want to make a difference with my movies. Then, I had very little knowledge about production, but now, I’m more of a professional.’

Many would believe that she had a rich family member somewhere who ‘dashed’ her the money she used in producing her first movie, considering her inexperience at the time. She doesn’t agree with that assertion, and she wastes no time in countering it. In her words,

‘Before I got into Nollywood, I was already doing business. I used to sell stuff, so I had my money to put into it, and my mum supported me with a loan. She collected her money back though, so there was no sentiment attached. I won’t say it was easy starting out because I spent about N3m in making my first movie, and that was quite a lot in 2005. I don’t actually get Executive Producers for my movies; I do that myself. Not like I don’t believe in going all out to source for funds, but it’s just not my thing. I had someone once who wanted to sponsor my movie, and we did that. But before the movie came out, they were already on my neck asking for their money. I had to return it to them after we finished filming; we had not even finished editing then. I told them I’ll give them their money back, but that they wouldn’t get any credit on the movie. Ever since, I only produce movies if it’s convenient for me.’

So we wouldn’t think she’s just guess-working her way to the top, she informs us that she has taken a directing course in Houston, USA, as well as a Visual Effects course, but she’s also quick to add that she’s still learning every day.

The tattoo-loving actress is known to be blunt and she speaks about that side of herself: ‘I believe in expressing myself; always stating my point, and sticking to what I believe in. People may read different meanings to it, but at the end of the day, I can only be myself; I can’t try to be someone else, or back-up what I don’t believe in. I wasn’t brought up like that. It has brought me here so far, and I love me.’

But has being blunt ever got her into trouble? She enthuses, ‘I don’t get into trouble. If I say anything anywhere, I will stand by it. I’m not the kind of girl who believes in gossip, or idle chatter. If I have anything to say, I say it and move on. If you have any problem with it, come and tell me.’

On reports that she once claimed to be half-Ghanaian, Rukky sets the records straight. ‘I think that was when I went to Ghana for the first time, and I was with some colleagues. We were just messing around and I think Yvonne Nelson told me something in Ghana that could be translated to what I tweeted at the time. It wasn’t anything serious; I don’t know why people take little things serious.’

On her new movie, Dark, she talks about it like a mother whose child is going to school for the first time; the excitement is palpable. ‘It’s extremely different from the regular movies we see out there. It’s about a woman who lost her baby during childbirth, and she actually believed it was the fault of the doctor, so she planned to kill the doctor’s child in return. Usually, I always call everybody I want to feature in my movies before I start writing, so I try to think about how they fit into the roles.

When I had the idea for this movie, I thought about Van Vicker, and I told him that I wanted to write a movie for him, and I also asked if he would be free to shoot at a certain time. He was like it’s different, and that he was ready to do it. I love to write romantic movies. That is empowering to women, and generally makes women happy, but Dark is a very serious movie; a lot was involved. It’s about family, pain, and a mother’s bond to her child. It sounds the same, but it’s different because it has a twist to it.’

She speaks more on the cast and their shared experience while on set, ‘Monalisa Chinda played the Doctor, while Van Vicker was her husband.

I acted as the obsessed woman which is something I’ve never done before. I also had two buff cops in the persons of Bolanle Ninolowo and IK Ogbonna.

There was also this amazing new child actor called Demarion Young who played Van’s son. It really took us a long time to get the perfect child for the movie, because we don’t have a lot of child actors in Nigeria. We held several auditions before we could get the perfect person.

The boy is so good, and he delivered his lines perfectly. He also looks so much like Van that I had to ask Van if he doesn’t have any child in Nigeria. My set is always fun and lively, and we needed it to be that way on this particular movie because the film is so serious. I had the best cast obviously.’

Dwelling on her sense of fashion, Rukky says she can never be caught wearing anything that doesn’t look good on her. She further defines fashion thus, ‘It means expressing yourself, and being comfortable in your own skin. I can never leave home without my sunglasses though, and the most

I’ve ever spent on them is about a thousand Dollars. But when it comes to what I can spend the most on in general, that’s bags and they’re ridiculously expensive.’

On how long it takes her to get dressed for events, she says, ‘It takes me just about 30 minutes to an hour if I’m not in a hurry, and if I’m pressed for time, I just wear whatever and go.’

All work and no love makes Rukky a robot, so we want to know what qualities her dream man should possess, and she sums it up with the following words: ‘He must be an amazing person with a good heart, and he should also have a sense of humour, as well as do everything I say. I like people that make me happy.’

On how she balances stardom with other aspects of her life, she quips, ‘I’m a very private person, and the only place you can ever get to see me is on Instagram and Snapchat because I don’t really go out. People don’t really know much about me, and most of what is written about me out there are false. I advise celebs to live a private life, and not to put too much information about themselves out there.’

For the legion of men out there who dream to make her their woman, she refused to state whether she’s in a relationship or not, but as regards marriage, she says, ‘By God’s grace, I’ll get married soon.’