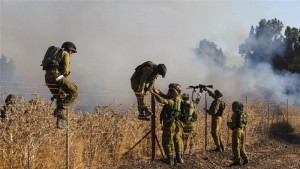 Syria’s state news agency has quoted a Syrian military source as saying that an Israeli army helicopter launched a number of rockets towards Syrian territory, targeting the transportation directorate and the governorate building in Quneitera. Aljazeera has more:

The attack on Thursday, which the SANA news agency said only caused material damage, came after an  an Israeli military spokesperson said that rockets had hit northern Israel and the occupied Golan Heights.

The Syrian Observatory for Human Rights, a UK-based monitoring group, said that the Israeli bombardments had targeted Syrian military positions in the Quneitra province and reported unspecified casualties among the Syrian troops. Following the rocket attack on Israel, an Israeli army spokesperson said in a statment that “the [Israeli] army sees Syria as responsible for the fire, and it will pay the price for it”.

Israel’s Haaretz’s newspaper reported that two rockets landed in the northern Galilee, and two in the occupied Golan Heights and that no damage or injuries were reported. Since Syria’s uprising began in 2011, the border area between the two countries has seen occasional violence.