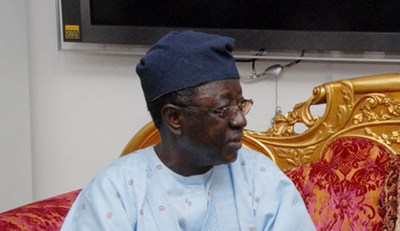 A former governor of Plateau State, Senator Jonah Jang, has faulted a report by the Sonni Tyoden-led transition committee, which put the state debt at N222.3bn.
Jang described the report as untrue, claiming that he left debts and liabilities of N103.9bn
He also disputed the committee’s claim that projects under his administration were sited in a lopsided manner.
Tyoden, who is the deputy governor of the state, had, while presenting the report of his committee to Governor Simon Lalong, said the ex-governor got N525.35bn as statutory allocation from the Federation Account for the eight years he was in office, but spent a total of N747.65 and left a deficit of N222.3bn.
In his reaction via a statement signed in Jos on Friday by a former Attorney-General and Commissioner for Justice in the state, Mrs. Olivia Dazyam, Jang said the debt figure paraded by the committee “was mischievously manufactured”, stressing that the comprehensive breakdown of the debt was well documented in the handover notes and urged the committee to study the handover notes properly.
The former AG, who described the committee’s report as “a clear distortion and manipulation of facts aimed at personal vendetta”, said “a quick look at the compositions of the committees revealed that members were deliberately selected and made up of persons that have grudges against the immediate past administration”.
While listing projects executed by the Jang’s administration across the three senatorial zones, Dazyam denied that the immediate past administration was selective in the distribution of facilities and services in the state.
She, however, advised the All Progressives Congress-led government in the state to focus on development and stop picking holes in Jang’s administration.
“The bar of governance in Plateau State has been raised by Jang and the people now use the performance as a yardstick to measure all other former governors”, Dazyyam said.