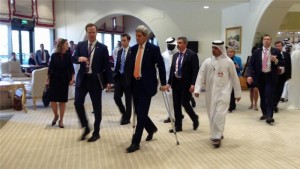 John Kerry, the US secretary of state, is meeting senior officials of Arab Gulf states to reassure them over last month’s nuclear deal between world powers and Iran. Kerry met the Emir of Qatar on Monday morning ahead of a separate meeting with the foreign ministers from the Gulf Cooperation Council (GCC). Aljazeera was there:

He is expected to hold a news conference later in the day with Qatar’s foreign minister, Khalid bin Mohammad Al Attiyah. At the start of Kerry’s meeting with GCC foreign ministers, Al Attiya h enumerated a number of other issues including the ongoing conflict in Yemen and the pursuit for an independent Palestinian state.

Ahead of Kerry’s arrival, foreign ministers of the GCC held a preparatory meeting in Doha on Sunday.

The Gulf Arab states have publicly welcomed the deal reached last month in Vienna but many have expressed private reservations.

Al Jazeera’s Hashem Ahelbarra, reporting from Doha, said that GCC officials are expected to “voice their concerns with the Iran deal”. “This is quite a delicate moment for the Gulf countries,” he said. “They are worried that Iran might finally be able to foster ties with the West, get the sanctions lifted and pursue an active role in the region.”