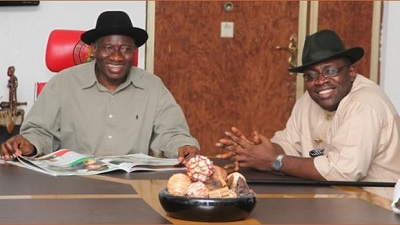 The Peoples Democratic Party Unity Group in Bayelsa State has expressed confidence that the intervention of former President Goodluck Jonathan and the party’s Board of Trustees will put to rest issues tearing the party apart ahead of the December 5 governorship poll.
The group, therefore, advocated a free, fair and credible primary election to elect the flag bearer for the party in the poll.
Spokesman for the PDP Unity Group, Timi Omubo, in a statement in Yenagoa, the state capital on Tuesday, also enjoined party members to stop misleading the public and concentrate on building unity for the party to retain Bayelsa after the election.
Omubo, who denied that the PDP BoT and former president asked the state party chairman, Col. Sam Inokoba (retd.), to step aside, noted that issues discussed at the meeting centered on the recalling of suspended and expelled members.
He said the group would ensure that the party remains united for the conduct of the party primaries and the governorship election.
He said, “There was no time the party chairman, Col. Sam Inokoba was asked to step aside. The BoT reversed the suspension and expulsion of some party members and former President Jonathan played a statesman role by allowing the peace committee to use his residence.
“We appeal to our teeming members and supporters to remain calm as the Unity Group is on a legitimate course of unity, to ensure that the will of the majority of party members prevail.
“The Unity Group is not about an individual but about the party and its capability to continue to win free and fair election in Bayelsa State”.