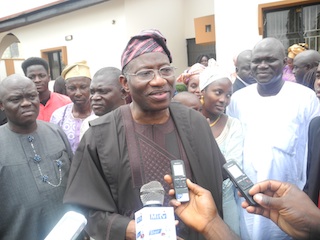 Reuben Abati, former spokesperson to former President Goodluck Jonathan has clarified that against the widely held belief that the former leader was a drunk, he actually does not drink.

Abati, who made the defence of his former boss during a recent interview with Rockcity 101.9 FM, Abeokuta, Ogun State, said he only saw Jonathan drink a glass of wine during special occasions, explaining that the former President was never drunk during his time in office.

“President Jonathan does not drink. You see, that’s one of the myths about that administration and you must understand how this thing is, it’s all about perception, communication, it’s all about what goes out and it’s about stereotyping. People just stereotype people from a particular part of the country as drunkards, and they look for justification for one type of behaviour or the other.

“But I can tell you that in my 4 years of working for President Jonathan, I never found him in a bibulous situation. If he ever tasted any drink, maybe a glass of wine during special occasions. All those stories about him drinking, about President Jonathan always being berated, about bibulous situations inside the Villa, those things did not exist.

“The people must find justifications to say this is why we think this situation is this way it is. I tell you and Nigerians will remember that he is a very humble man; he is a very committed person to the Nigerian project. If you look at the results of the elections, you’ll see that he lost the elections with about 2.5 million votes or thereabout, which means that a large number of Nigerians still believed in him and also believed in his ability and his capability of his administration to move Nigeria forward. We were dealing with a democracy; the people have a right to make a choice, when the people make a choice, we respect that choice.

“And our commitment as Nigerians, whoever we may be, whatever we maybe our station, is to remain committed to Nigeria, and to support whoever has emerged and to respect the choice and the decision of Nigerians.

“This is not about witch-hunt, it’s not about criticizing people, the Nigerian people have spoken and we stand by the decision of the Nigerian people. And we all support whoever is there to move Nigeria forward. So this backward looking, can we just look forward? Can we all just work together to move Nigeria forward? For me, that is where the emphasis should be, because we are all Nigerians and at the end of the day the country is more important than all of us,” he said.