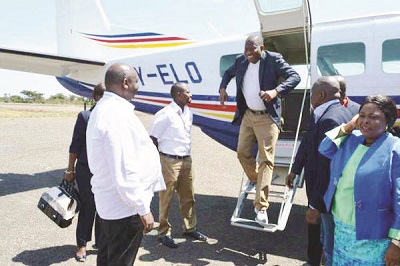 In one of the aircraft was his protection detail made up of Kenya State Security while the second carried the former Nigerian leader, his wife Patience and two of their children.

Mr. Jonathan is reportedly at the reserve for a three-day tour to witness the world famous wildebeest migration.

The former Nigerian first family were booked at the new Angama Mara Lodge at the Oloololo conservancy.

They were received by Narok Governor Samuel Tunai, who also doubles as the Council of Governors tourism committee chairman.

According to the governor, more than 500,000 tourists from all over the world are expected to witness the breathtaking migration of wildebeest across the crocodile-infested Mara River.

Jonathan, who refused to speak with reporters on his arrival to the reserve, according to Kenya media, is the second dignitary to visit the reserve in less than a fortnight after the King of Swasiland, Mswati III.