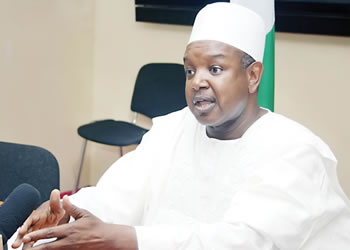 The Governorship Election Petition Tribunal in Kebbi state, on Tuesday, dismissed the petition filed by the PDP governorship candidate, retired Gen. Bello Sarkin-Yaki, challenging the election of Governor Atiku Bagudu.
Bagudu of the APC was returned elected as governor of the state by INEC, at the April 2015 general election.
The Chairman of the tribunal, Justice Kazem Alogba, who delivered the verdict in Birnin Kebbi, said the petitioner failed to adhere to the process of filing a petition.
He averred that the petitioner abandoned the petition by filing for a free hearing notice behind time.
Mr Ibrahim Mohammed, counsel for the petitioner, however, objected to the decision of the tribunal, stressing that an appeal would be filled at the Court of Appeal in Sokoto.
Also reacting to the verdict, Mr Yakubu Maikyau (SAN), counsel for respondent applauded the judgment, describing it as a victory for democracy.
NAN reports that APC supporters hailed the tribunal’s verdict.