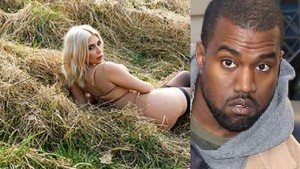 Kim K’s sister, Kendall Jenner has come forward to blame Kanye West for all the tasteless fashion choices her sister has been making since they began dating.

According to RadarOnline, the young model thinks Kanye is making one major fashion faux pas for insisting on styling Kim!

The site states that the “it” model of the moment has even begged West to stop after Kim’s humiliating photo shoot in the dirt for System magazine last July.

Kendall, notes the insider, is completely ”sick of Kanye ‘de-styling’ Kim and wants him to stick to what he does best: music.”

”After that Bound video and dressing her in those dog-dung brown leggings — this has all become too much for Kendall. She says it reflects badly on her,” adds the insider.