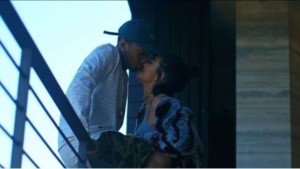 If fans thought the lyrics to Tyga’s controversial song, ‘Stimulated’ was upsetting then wait till you watch the video which just dropped on August 30.

Newly-turned 18 Kylie Jenner is seen planting a very wet kiss on her boyfriend in the video.

The song drew attention after its release on August 25 thanks to its graphic lyrics about their relationship.

Tyga raps: “They say she young, I should’ve waited. She a big girl, dog when she stimulated”.

Unfortunately, the song reportedly failed to stimulate the Kardashian clan as a source told RadarOnline, that the entire Kardashian family is not a fan of the song.

However. Kylie thought it was really cool and saw no reason why people had a different opinion about the lyrics.

‘Stimulated’ video was released on Sunday night right after the couple sat in the front row at the VMAs together.