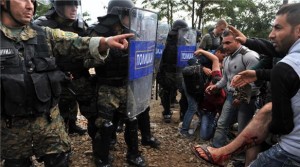 Macedonian police have had to fire tear gas at refugees trying to enter from Greece after a night spent stranded in no-man’s land by an emergency decree effectively sealing the Macedonian frontier. At least four bloodied refugees were taken for treatment on the Greek side of the border, Reuters reported on Friday. Aljazeera reports:

Several thousand people from the Middle East, Africa and Asia, many of them Syrian refugees, spent a cold night in no-man’s land after Macedonia on Thursday declared a state of emergency and effectively blocked its southern frontier to refugees fleeing war.

The flow into Macedonia had reached 1,500-2,000 per day in recent weeks, up from some 200 daily in May, leading to desperate scenes of crowds wrestling to board packed trains at a nearby railway station, children squeezed through open carriage windows.

Macedonian authorities, however, denied any clashes had taken place. Interior Ministry spokesman Ivo Kotevski told AFP news agency, there was “no incident, no tear bombs… nothing like that on Macedonian side”.