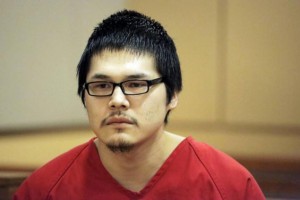 Active killed the grandparents, Touch Chea, 73, and Sorn Sreap, 71, and raped the 2-year-old girl and her 91-year-old great-grandmother. The 2-year-old girl was rushed to the hospital, where she underwent surgery for the injuries she sustained while being raped. However, she succumbed to her injuries.

Active broke into the family’s home just 12 hours after he was released from prison for raping another child. After spending 7 and a half years in prison, Active was freed on probation. That is when he went to the home of the victim in Anchorage, and raped the victims.

When the child’s parents returned home, they found Active naked in the home. Active grabbed his boxers and fled from the house.  Police caught him a short time later, and he was arrested.  Active maintained his innocence and showed no remorse over his actions.  At sentencing, Active made a public statement saying: “These people lost three loved ones, and my family is losing one today all because a mostly white jury couldn’t rely on the true facts of my case and instead based their finding of guilt on how they felt.