An 81 year old South Korean man identified simply as Choi set himself on fire this morning Wednesday, August 12th outside the Japanese embassy in Seoul during a large protest over Japan’s forced recruitment of sex slaves to service military brothels during World War II. 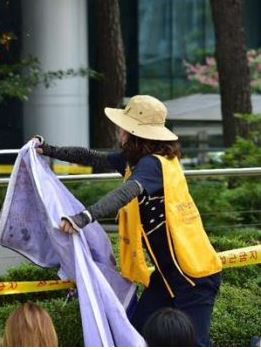 Other protesters tried to douse the fire with blanket and bottled water before emergency services arrived. He was eventually removed to an ambulance and rushed to the hospital. Fortunately his condition is not critical and he is expected to recover eventually.

The protest on Wednesday drew close to 1,000 protestors to the embassy ahead of Saturday’s 70th anniversary of the end of Japan’s 1910-45 colonial rule over the Korean peninsula. Although Japan insists the issue was settled in the 1965 bilateral agreement that restored diplomatic ties between the two nations, which saw Tokyo make a total payment of $800 million in grants or loans to its former colony, South Korea says Japan has still not done enough to atone for the forced recruitment of South Korean women to work in Japanese military brothels as so-called “comfort women”.

The issue has strained relations between South Korea and Japan for years with South Korean President Park Geun-Hye saying there can be no meeting with Japanese Prime Minister Shinzo Abe until Japan makes full amends. 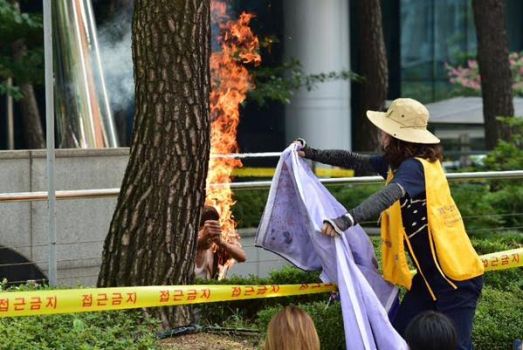 Self-immolation in South Korea was common during the pro-democracy movement of the 1980s and early-90s, when a number of student activists set themselves on fire during public demonstrations. A 56-year-old disabled man died after setting himself on fire in a dispute with his landlord five months ago.