Man With Three Wives Dies While Sleeping With Secret Lover

What would lead a man who has three wives to still keep secret lovers? 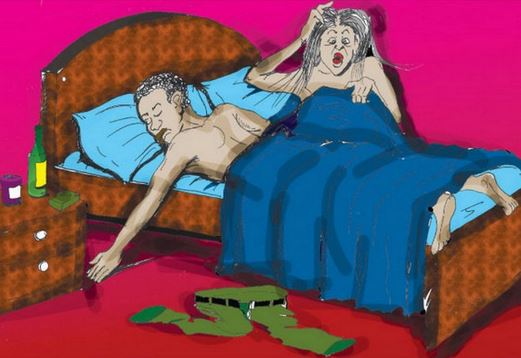 A 63-year-old married man with three wives, has been found dead during a marathon sex session with his secret lover, herself a married woman.

The man identified simply as Baba Ibeji, according to residents in his Oko-Oba, Lagos residence, is said to be so fond of women that he divorces and gets married every two years.

Baba Ibeji, a landlord in the area and father of 15 children, according to reports, was found dead in a hotel room in the area some hours after he booked in with the woman whose family used to live in his house till he was caught sleeping with the womanand the family had to pack out.

A bar man in the hotel who did not want his name in print, told Pulse:

“Baba Ibeji is a regular customer here and he comes in with different women, including small girls and even married elderly women.

On that fateful day, he came in with the woman and paid for three hours but after about an hour, we heard the woman’s screams and we rushed to the room to find the man on the floor, gasping for breath.

We tried to administer first aid treatment on him while our manager tried to get a taxi to get him to the hospital but he died right there.

The police was called in and his corpse taken away while the woman was arrested.”