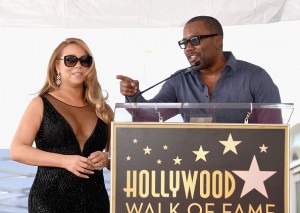 With the widely watched “Empire”, set to premiere it’s 2nd season in September, the co-creator Lee Daniels has revealed that Mariah Carey will be seen on the Fox drama next season.

Lee announced this as Mariah received a star on the Hollywood Walk of Fame.

“Watch her on ‘Empire,’ you guys,” Daniels broke the news to the crowd that gathered for the ceremony. “She’s coming on ‘Empire,’”

Daniels also said “I stopped everything I was doing to make sure that I was here for you, because you’ve always been there for me, Mariah, before Lee Daniels was Lee Daniels. I love you with all my heart. I’m so proud of you.”

Carey will join other celebs which include Ludacris, Alicia Keys, Chris Rock and Lenny Kravitz.