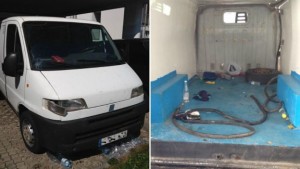 Police in Austria say three Syrian children and their families who were rescued from a minivan containing 26 migrants have disappeared from the hospital where they were being treated. The children were taken to hospital in the town of Braunau am Inn on Friday suffering from severe dehydration. Their discovery came a day after 71 bodies, thought to be migrants, were found on a dumped lorry in Austria.

Several European countries have called for urgent talks on the migrant crisis. Austrian police said they stopped the minivan in Braunau, which sits on the country’s border with Germany, on Friday and arrested its Romanian driver.

The children – two girls and a boy aged between one and five years old – were said to have been crammed in the back along with other migrants from Syria, Afghanistan and Bangladesh.