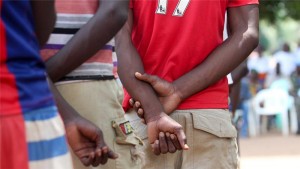 The anti-Balaka militia has released 163 children from its ranks in the Central African Republic, a country where as many as 10,000 youth have been recruited to fight for armed groups since 2013. Aljazeera reports:

The children were handed over at a ceremony on Friday in the northern town of Batangafo that was facilitated by the UN children’s agency (UNICEF) and the UN peacekeeping mission (MINUSCA) in the country.

The youth were freed from the anti-Balaka group, which still vies with the Seleka rebels for control of this town where some 30,000 people are living in a refugee camp. “The move to end child combatants [in CAR] is not moving fast enough, yes, but it is an ongoing process [and] while the leaders of the armed groups have committed to stop recruiting children, it does take time to implement on the ground,” Donaig le Du, a spokesperson for UNICEF in Bangui, told Al Jazeera on Saturday.

Le Du said that negotiating the release of this particular group of children took around two months, and it was a process that could not be rushed.