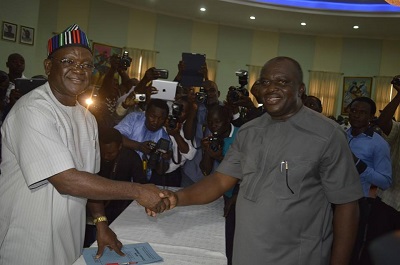 The Secretary to the Benue State Government (SSG), Targema Takema, has alleged that over N6billion local government funds were diverted into private accounts annually when ex-Governor Gabriel Suswam held sway for eight years.

The SSG, who spoke at a reception organised in his honour by the Mbaiwoo Development Association in Buruku Local Government Area of Benue State yesterday, said contrary to the 29,000 work force projected as workers of the local governments by the previous administration, a biometric audit of council workers showed that only 14,000 workers were employed in the 23 councils of the state.

He said the bloated figure took between N600million and N700million of local government funds monthly, which went into wrong hands.

Mr. Takema said as a member of the transition committee, he was privy to the fact that the indebtedness of the state as established by the committee “now stands at N130billion as against the N90billion earlier mentioned”, adding that arrangements had been concluded to ensure that those who stole from the public purse were made to refund the money.