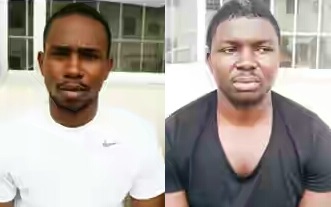 The National Drug Law Enforcement Agency has arrested two artisans at the Murtala Mohammed International Airport, Lagos for cocaine trafficking.
The suspects, Emeka Emehelu (39) an automotive technician and Aduaka Christopher (38), a baker, were arrested by the agency as they returned from Brazil.
The Lagos Airport NDLEA Commander, Mr. Hamzar Umar, stated that the suspects were nabbed with some white powdery substance which tested positive for cocaine.
He said, “King Emeka Emehelu was caught with two parcels of cocaine weighing 1.595kg hidden in his luggage, while Aduaka Chuka Christopher was found to have ingested five wraps of cocaine weighing 80g. The cocaine had a combined weight of 2.395kg. They are being investigated and will be charged to court soon”.
In his confession to the crime, Emehelu, who hails from Enugu, said that his one-year break in Brazil was a setback to his career as an automobile technician.
He said, “I am married with four children. I left Nigeria a year ago for Brazil. As a result of my poor living condition in Brazil, I spent one year without seeing my family in Nigeria.
“I accepted to smuggle cocaine for a N1.2m fee. I wanted to use the money to establish a business for my wife, who has been struggling to take care of my family since I left Nigeria”.
Christopher also blamed his involvement in drug trafficking on his financial predicament.
According to him, he worked as a baker in Brazil for one year but the income was not enough to sustain him.
He said, “I would have made N2m from this trip. I was supposed to smuggle the drugs to Nigeria and share the proceeds with my sponsor.
“Unfortunately, I could only swallow five wraps because I was vomiting the drugs. They were disappointed in me for swallowing only five wraps. I regret getting involved in drug trafficking”.