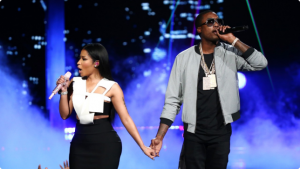 Superstar American female rapper, Nicki Minaj, who’s currently on her world tour with her boyfriend, Meek Mill, has made headlines over pregnancy rumors.

Nicki called Meek her ‘baby father’ at a show over the weekend, rekindling old rumors of her carrying his baby.

According to TMZ, Nicki was just joking as there are reports that she often lovingly refers to her closest dudes as ‘baby father.’

Sources close to Nicki say she uses the phrase ‘baby father’ frequently, at least twice on this tour, but it’s not the same as ‘father of my child.’

It’s just a term of endearment for those she likes.

She’s even referred to Lil Wayne as her baby daddy in the past, even though they’re just friends.

Nicki hasn’t entirely ruled it out, TMZ’s source adds, but ‘there will be a wedding before they’re picking out baby names.’