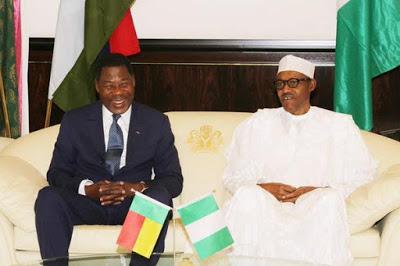 Nigeria and Benin Republic on Tuesday in Abuja agreed to contribute toward strengthening security in the ongoing fight against Boko Haram.

President Muhammadu Buhari said at a joint press briefing after a closed door meeting with President Boni Yayi of Benin Republic that they discussed economic cooperation between the two countries in a bid to promote regional integration.

Buhari said he was happy that Benin Republic, under the auspices of the Lake Chad Basin Commission, had identified with Nigeria in its ongoing war against terror.

His words: “We are happy to inform you that we have identified our problems; the correct priorities for Nigeria, firstly is the security of the country and then the economy.

“Nigeria being the main battle ground for Boko Haram under the auspices of Lake Chad Basin Commission we have agreed on what contributions the countries will make, that is of Benin, Chad, Cameroon, Niger and Nigeria.

“I have to thank, most sincerely, the President of Benin for identifying himself with us in the immediate Lake Chad Basin Commission group to make their contribution”.

Buhari commended on-going efforts by the security forces in tackling Boko Haram and reiterated the determination of his administration to defeat all forces of terror.

In his remarks, President Yayi praised Buhari for his leadership role in the on-going war against Boko Haram.

He expressed the solidarity of Benin Republic in the fight against terror and stressed the need for the two countries to encourage other ECOWAS member states to put in place necessary mechanisms that would strengthen regional integration.

He also solicited the support of Nigeria toward the successful hosting of the COPAZ Summit of Heads of State and Government scheduled to hold in Benin Republic soon.

Yayi called on both countries to work closely toward reinforcing border security. (NAN)