He was drenched with sweat by the time he wriggled himself through the narrow entrance of his room into the passageway. Looking very depressed and drowsy that Thursday afternoon, he dragged himself along the hole-ridden passage and collapsed into the rickety sofa beside the staircase that leads to the upper floors in one of the buildings in the barracks. 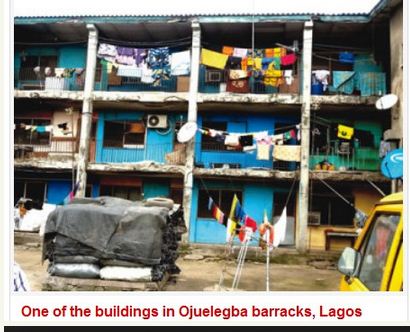 With frustration written all over his face, Emma Uden (not real names), a sergeant in the police, kept muttering to himself, but dosed off few minutes later. Apparently disturbed by the music blaring in his neighbourhood, Uden could not but open his eyes feebly and intermittently.

His pain was obvious to anyone who came across him, but the reason for his frustration was largely unknown. However, as Uden would later tell our correspondent in a conversation he grudgingly consented to, since the apartment allotted to him in the barracks collapsed in June last year, he and his family had been living in the kitchen of one of the dilapidated buildings in Pedro police barracks, Somolu, Lagos. That was his main frustration.

“It was the only alternative we had at that time,” he said, as he unbuttoned his shirt to enjoy some fresh air.

Since he and his family were constrained to live in a room (kitchen), he said life had become one of bitterness and frustration. To escape the intense heat of the day and the constant constraint of space that his family of six could never live comfortably with, Uden had been used to sitting outside anytime he was home.

Hoping that respite could eventually come his way if he opened up to Saturday PUNCH, Uden wasted no time in leading our correspondent to his room where he lives with his wife and their four children. He opened the door and lowered his head as he made to enter, to avoid being bruised on the head by the doorframe. As he opened the curtain for our correspondent to enter, the odour, which seemed like a mixture of wet rug and accumulated sweat, that oozed out of the stuffy room was disturbing and could make anybody puke.

The room was like a store reserved for unused household items. The only window in the room appeared dysfunctional while the base of the wall that was visible was seriously dampened, and the ceiling riddled with signs of serious dilapidation. Expectedly, Uden, whose four children had occupied the only bed in the room, appeared discomfited by the state of the place he called home as he continually scratched his head to look for the right words.

Even though he is not alone in such a tortuous situation in the premises, he said he had resorted to coming home just to sleep, unless he was off duty. This, he said, was to avail his family some space in the room and that sometimes he would rather stay in his office or volunteer to go on patrol, all in a bid to stay away from home. They don’t even live alone in the house, occasionally, the family live with big rats that find their way out of the broken septic tank located close to the kitchen into the room.

He said, “When we were still living in the room and parlour before our building collapsed last year, we were managing because of the small space, not to talk of now that we have just one room, which used to be a kitchen. It’s like living in a cave. That is the lot of most of us.

“Can you imagine that? We live in a kitchen, and you want policemen to be your friends while you all live in your comfortable mansions. You expect us to carry rifle and risk our lives to protect people. Haba!”

His passionate expression of grief was second to none, even though he said he had concluded arrangements to leave the barracks for a room and parlour accommodation he secured somewhere in Bariga area of Lagos.

He added, “If nobody takes care of us, we will take care of ourselves, because apart from the space issue, we (residents of this barracks) queue to use toilet and bathroom, because the ones available are not adequate. So we queue to bathe every morning. Here, three-room and parlour flats share one toilet and bathroom. For me and my family who live in an abandoned kitchen, we pair with another flat. So, we join the queue every morning. “Don’t forget that we are all adults with families. I feel ashamed that I go through this every morning? Tell those people in government what you saw here. Let them know we are suffering. Even when we get to the office, we either sit under the tree or stand in the sun.” Some other policemen in the barracks who shared Uden’s views, lamented over the poor state of infrastructure in the barracks, saying they had always been living in perpetual fear for their lives, occasioned by the decrepit buildings.

As our correspondent observed during the visit, almost all the buildings in the barracks had obvious signs of imminent collapse. In fact, the derelict of the block six that collapsed last year gives an impression that the collapse must have been imminent before it happened. ‘I cry when I look at my children’

One of Uden’s neighbours, who also lives in a room and parlour, told Saturday Punch that it is interesting that Nigerians expect so much from policemen they are not well taken care of. He said the hardship and the living condition he had had to subject his four children and his pregnant wife to made him cry sometimes.

Fighting back tears, he said, “Sometimes, when I look at the way my children sleep on the floor, sweat almost all the time because of the poor ventilation, and the obvious frustration and inconvenience written on their faces, I cry. I know that they are not happy with the situation, but they are helpless.

“I pity them when I see them going out to look for water, living in such a condition. Sometimes, when I’m at work, I think about them and it affects me. These things make me cry, silently. Sometimes, we are on the same queue at the entrance of the bathroom. You can imagine that. Which father will be proud of such?”

The situation at the Pedro Barracks is akin to what obtains in many other barracks across the country. It also revealed how barracks that used to be a status symbol for policemen have become a shadow of death in disguise.

In the past, it was mandatory for police officers and men to live in the barracks, as they were prevented from living among ‘civilians,’ but years after, the reverse is now the case.

These days, the status symbol is for any policeman worth his salt to live outside the barracks due to the ignominious life that obtains in there. Some of them even said jokingly that they live like prisoners.

This shift, as pointed out by the policemen who have lived in the barracks for many years, was due to the lack of maintenance of the barracks, increasing population with no attendant improvement in facilities and the refusal of the government to build new barracks for policemen.