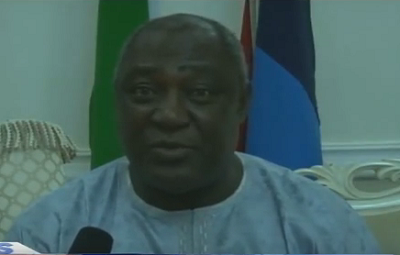 The immediate past Chief of Defence Staff, Air Chief Marshal Alexander Sabundu Badeh (retd.) has opened up on some of the factors that hindered the war against insurgency in the North-East, including unserviceable and obsolete equipment, saboteurs and inadequate training for officers and men of the Nigerian Armed Forces.

Badeh, who was sacked as Chief of Defence Staff over two weeks ago by President Muhammadu Buhari, was speaking in an interview with Channels TV at the weekend.

He said: “We found out that we had fifth columnist in the military that were leaking information to terrorist and then we also had challenges of unserviceable equipment. If I go down memory lane, I think the last time any piece of equipment was bought for the Nigerian army was some Armoured Personnel Carriers (APCs) bought in 2006 and how many were they? They were few and from that time on, we were not using these APCs – we were not even allowed to use them”.

Still recalling the rot in the military over the years that have now been exposed by the Boko Haram insurgency, the retired Air Chief Marshal said “If we go way back from end of 1993, from then on, soldiers were not even allowed to go to range to go and practice. So a soldier that is not practicing how to use his gun, what kind of military are you going to have? So those were the challenges we had that when we were faced with Boko Haram, it became a very big challenge.

“We have been trying to increase the strength of the military by ourselves. You don’t give me budget and say I should go and build barracks – it [building barracks] is capital intensive. So even if we recruit so many people in the military now, we don’t have where to house them. So it is a challenge too that government must face. Government must build barracks for us so that we can recruit more. For a population of over 170 million, what we have in Nigeria cannot be adequate to protect us. So those were the challenges we had. Inadequate equipment, obsolete equipment”.

He also spoke on the obsolete equipment and assets of the Air Force saying “In fact we are the ones that are flying probably the oldest fighter airplanes in the whole world. Alpha jets we bought them in 1981. That is the backbone of our operations in the Northeast, so they are too old”.