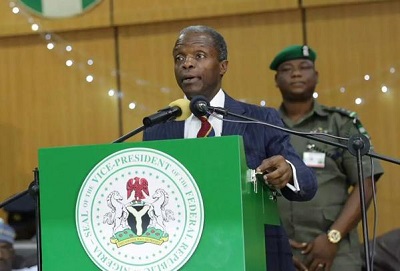 Vice President, Professor Yemi Osinbajo says the bailout for states in Nigeria by the Federal Government was promoted by the fact that the 36 states of the federation are owing commercial banks N685 billion which has negatively hindered them to settle most of their commitments in respect of salaries and other entitlements.

Speaking at a ceremony in honour of President Muhammadu Buhari’s Senior Special Assistant on Media, Mallam Garba Shehu, Osinbajo said this was not the first time the Federal Government is taking such a step.

Osinbajo also noted that the Buhari administration operates under zero tolerance to corruption, adding that the era where looting public fund bring politicians together is over.

He said that the Federal Government will also pursue to a logical conclusion, the implementation of the promised social safety net policy that will alleviate poverty and ensure that democratic dividends gets to the common man.

The vice president commended Mallam Garba Shehu for being consistent and dedicated in the profession of journalism.