Home Politics Nigerians Will Know Those Who Have Short-changed Them In A Matter Of...
Facebook
Twitter
WhatsApp 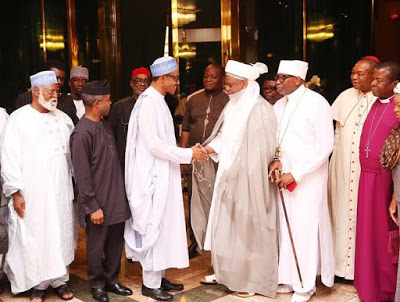 While the National Peace Committee for the 2015 general elections headed by former Head of State, Gen. Abdulsalami Abubakar (retd) asked that due process be followed in the present administration’s anti-corruption drive, President Muhammadu Buhari informed the committee that the prosecution of those who have soiled their hands with public funds will begin in a matter of weeks.

Special Adviser to the President on Media and Publicity, Femi Adesina, stated this on Tuesday after members of the committee met with Mr. Buhari behind closed doors at the Presidential Villa, Abuja.

Buhari told the committee that his government was “irrevocably” committed to doing all within its powers to break the vicious cycle of corruption, unemployment and insecurity in Nigeria.

“Nigeria has to break this vicious cycle before we can make progress”, President Buhari told Abdulsalami’s committee.

The president also disclosed that his government was diligently getting facts and figures pertaining to the nation’s stolen funds, before going on to prosecute identified culprits.

Buhari also told the committee that under his leadership, the Federal Government would ask for the return of stolen funds stashed in foreign banks and ensure that those who stole the funds are made to stand trial in Nigerian courts.

He also disclosed that his administration was reorganising the country’s revenue generating institutions as part of its actions to address the national problems it inherited.

Towards this end, President Buhari said a Treasury Single Account had been established for all Federal revenue to ensure greater probity, transparency and accountability in the collection, disbursement and utilisation of national funds.

“We have really degenerated as a country. Our national institutions, including the military, which did wonderfully on foreign missions in the past, have been compromised. But we are doing something about it. The military is now retraining and morale has been resuscitated.

“As Petroleum Minister under Gen. Olusegun Obasanjo in the 1970s, I could not travel abroad until I had taken a memo to the Federal Executive Council asking for estacode. Now, everybody does what he wants.

“That is why security-wise and economically, we’re in trouble”, President Buhari told his guests, adding that those who have stolen the national wealth “will be in court in a matter of weeks and Nigerians will know those who have short-changed them”, Buhari said.

Members of the National Peace Committee who were at Tuesday meeting apart from Gen. Abubakar are: Bishop Matthew Hassan Kukah, His Eminence, Sultan of Sokoto, Alhaji Sa’ad Abubakar; Cardinal John Onaiyekan, Pastor Ayo Oritsejafor, President of the Christian Association of Nigeria (CAN); and Archbishop Nicholas Okoh, Primate of the Anglican Church of Nigeria.