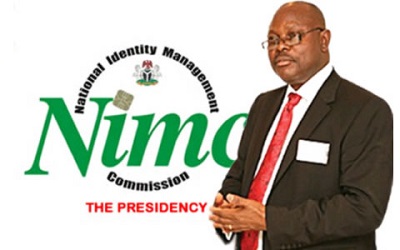 Mr Chris Onyemenam, Director-General of NIMC, made this known to the News Agency of Nigeria (NAN), in Abuja on Wednesday.

Onyemenam said the management of both agencies had met to map out plans for harmonising biometric data of all Nigerians.

The director-general said although both agencies performed different roles, they also had areas of convergence.

He said plans were underway to set up an inter-agency committee to facilitate the harmonisation.
“Senior management staff of NIMC, led by the Director General, visited the Chairman and management of the NPC at their headquarters in Abuja.

“The purpose was to deliberate on the recent presidential directive on the harmonisation of biometric data bases and data collection in the country.

“Recall that Mr President recently suggested that agencies and departments concerned with biometric data bases and ongoing data collection in the country should harmonise their activities”, he said.

Onyemenam earlier said that seven million Nigerians had so far been captured in the data base of the commission.

He said the commission was at the stage of migrating the data from the Bank Verification Number, and “that is about 20 million people”.