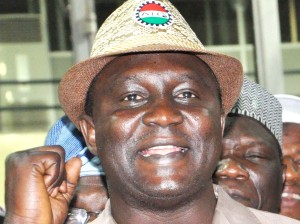 President Muhammadu Buhari’s efforts to recover stolen funds from officials of the past administration on Sunday received the backing of the Nigerian Labour Congress.

The NLC President, Comrade Ayuba Wabba, said Mr. Buhari should note that he was elected based on his integrity and promise to clean the rot in the system, adding that he should not cave in to any pressure from anybody or group to stop the anti-corruption war.

“One person who will serve as good example for all Nigerians is the president and he must be ready to lay a good example.

“We are aware that some people are persuading him not to go ahead with the probe, but he should not allow any pressure from anybody. He should go ahead with it and even prosecute whoever is found guilty”, he said.

Wabba said organized labour was planning a rally in support of the probe.

“We are planning a rally and we will continue to support him if he continues to stand on the basis of the truth”, he said.

The NLC chief noted that June allocation was increased by about 13 per cent, pointing out that the increase would have ended in private pockets had President Buhari not taken some measures to block leakages in the system.

“This increase showed that there has been a leakage in the past. This 13 per cent would have ended in some individual pockets. This shows that President Buhari is ready to fight corruption and he if continues, it will help the economy”, Wabba said.

On the jumbo pay allocated to the National Assembly, Wabba expressed regrets that despite the promised by the lawmakers to reduced and re-address the allocation, they have rejected taking a pay cut.

He vowed that labour will engage the lawmakers over the issue just as he demanded explanation on how the National Assembly allegedly spent N600 billion in the last four years.

“By 2011, all that appeared under the National Assembly budget was N150 billion without any breakdown. Nigerians need explanation.

“They should try to conform to the system and allow the rule of law to prevail. This jumbo allocation is not what was approved, rather it is what they approved for themselves.

“They should explain to the Nigerians how they arrived at this figure. This is corruption from the highest order and we will not allow this. Our lawmakers should be ready to leave by good example because Nigerians are watching”, Wabba said.