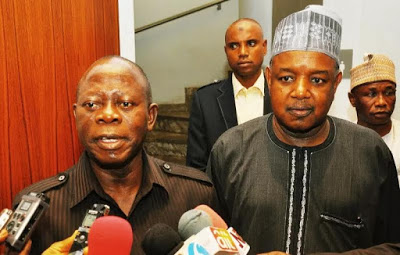 The member representing Ohaozara/Onicha/Ivo Federal Constituency in the House of Representatives, Linus Okorie, has advised President Muhammadu Buhari to quickly call Governor Adams Oshiomhole of Edo state to order on the purported appointment of two foreign audit firms to carry out a forensic audit of federal government revenue generating agencies from 2010 to 2015.
The Oshiomohole-led National Executive Council Adhoc Committee on Excess Crude Accounts and Remittances to the Federation Account had last week announced that it had engaged the services of PricewaterhouseCooper and KPMG to conduct a forensic audit of the Nigerian National Petroleum Corporation, Nigeria Customs Service, Federal Inland Revenue Service among other federal government revenue-generating agencies.
However, in a statement in Abakaliki, the Ebonyi State capital Tuesday, the lawmaker noted that neither the Adhoc Committee nor the NEC itself has the power under the constitution to make the purported appointments.
Mr. Okorie also stated that even if they had the legal powers, the said appointment is contrary to the clear provisions of the Public Procurement Act 2007, adding that the NEC created under the part 1 of the third schedule 1999 constitution (as amended), is merely an advisory body to the president and has no authority to enter into contractual obligations on behalf of the federal government.
“Specifically, the section provides that the National Economic Council shall have power to advise the President concerning the economic affairs of the Federation, and in particular on measures necessary for the co- ordination of the economic planning efforts or economic programmes of the various Governments of the Federation.
“Section 17 of the Public Procurement Act clearly defines the approving authorities for all procurements by the federal government as Tenders Board and a Ministerial Tender Board. Therefore, clearly and unambiguously, the NEC cannot by any stretch of the imagination be construed as an approving authority under the Act”, he said.
The lawmaker also stated that the appointment announced by Governor Oshiomole is in contravention of sections 19, 20, 44 to 47 of the Public Procurement Act 2007 with respect to procurement plans, implementation and the engagement of precise and ascertainable consultants.
According to him, the Committee did not go through the acceptable procurement procedures in arriving at the appointment announced by Governor Oshiomhole.
He outlined the procedure to include publication in national and international newspapers, expression of interest, pre-qualification, open competitive bids, stakeholder observation and related transparency procedures.
Whilst backing every legitimate effort by the present administration to recover stolen assets, Mr. Okorie warned against any resort to extra legal means of engagement no matter how attractive that may seem.
He reiterated the call by Bishop Mathew Kukah on President Buhari to act within the confines of the law in his quest for loot recovery, and more importantly not to lose focus of his responsibility for good governance.
“President Buhari must avoid any extra legal means, no matter how attractive and populist it may seem. He must remain conscious of the legal maxim that in a democracy, it’s better for 10 offenders to escape justice than one innocent person to suffer injustice”, he said.
Mr. Okorie, therefore, urged President Buhari to act swiftly by calling Governor Oshiomole and his Committee to order by cancelling the purported appointment, which he said has sent wrong signals on the government to abide by the rule of law.
“While it is within the government’s legitimate mandate to appoint the said forensic auditors, it must be done by the proper authority and within the ambits of law. Anything to the contrary is both illegal and illegitimate”.