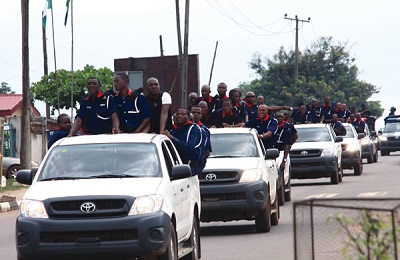 The Nigeria Security and Civil Defence Corps (NSCDC) on Sunday said it has not pulled out its personnel from the battle front, insisting that they are still part of the counter insurgency forces fighting Boko Haram in the Northeast.

The Adamawa State Commandant of NSCDC, Muhammadu Durumin-Iya, who was reacting to a media report, denied ever saying anything to indicate such.

“The publication on NSCDC withdrawal is false and misleading and is against the ethics of journalism”, he said.

Durumin-Iya reiterated the resolve of the corps to discharge its responsibilities in line with its mandate, calling on the media to support the corps’ activities.

He appreciated the synergy between NSCDC and other security forces in the theatre of operation in the Northeast, adding that his men will remain part of the counter-insurgency operation until Boko Haram is defeated.