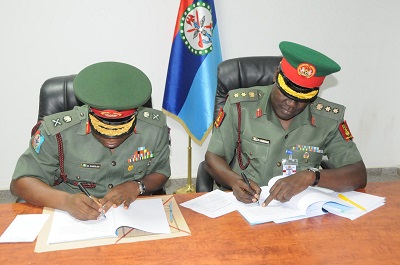 The Defence Headquarters has a new director of information. He is Rabe Abubakar, a colonel.

Mr. Abubakar took over from Chris Olukolade, a major general, who is proceeding on retirement after 35 years of meritorious service in the military and to the nation in general, though still remain in active service till September 2015.

While addressing the media shortly after taking over, Mr. Abubakar said he was aware and conscious of the security challenges in the country and the need for collective efforts to confront it.

“There is absolute need for synergy of efforts and collaboration among all stakeholders to re-strategise in the area of information collection, management and determination in counter terrorism and insurgency”, he said.

The new Director of Information stated that he would make himself readily accessible, available, responsive and proactive in dealing with media and other partners in the course of promoting the military/media relationship.

He promised to maintain excellent and robust press relations with all segments of media outlets to support the Nigeria Armed Forces operations and activities.

Mr. Abubakar reiterated his intention to adopt positive measures in his resolve to promote excellent civil/military relations, thereby gaining public understanding and goodwill in support of troops in the theatre of operations.

He promised to maintain the professional standard set by his predecessor, and even work hard to improve upon his achievement by tapping from his wealth of experience and knowledge from time to time.

Mr. Abubakar was born on April 7 1965. He hails from Batsari Local Government Area of Katsina State.
On completion of his Secondary education, he proceeded to obtain his Bachelor of Arts Degree in History and was later commissioned into the Nigerian Army as a Second Lieutenant in 1989.

Since commissioning, the senior officer has held several Command and Staff appointments some of which include: Coordinator Joint Media Centre at the Headquarters of the Joint Task Force Operation in the Niger Delta; Commandant, Nigerian Army School of Public Relations and Information (NASPRI) Lagos; and Executive Director, Corporate Affairs, Nigerian Army Welfare Limited.

The senior officer has also attended several courses. These include Company Amphibious Course and National Defence College, China. His hobbies include Jogging, Badminton and reading.

He is happily married and blessed with children.