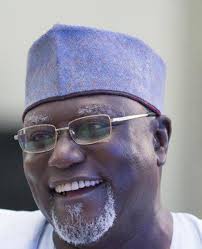 The Director-General, Department of State Services, Mr. Lawal Daura, has said that the service will not stop its clampdown on corrupt public officials and other saboteurs.
Daura, who was apparently reacting to the ongoing investigation of the immediate past National Security Adviser, Col. Sambo Dasuki (retd.) and crude oil thieves by the DSS, said the service would be professional in the discharge of its duties and under his leadership, the DSS would be accountable to Nigerians.
The DSS boss stated this in an interview with Aljazeera TV on Friday.
“Whatever comes before us with facts and figures, it will be dealt with equally as required by the law. The ongoing investigations and clampdown on corrupt persons and saboteurs of the nation’s interests will be sustained”, he said
Daura, in the interview that lasted less than 30 minutes, assured Nigerians of a more resolute and professional service, which he said would attend to valid reports brought before it without prejudice to anybody.
He, therefore, urged Nigerians to raise the level of their expectations, adding that the service was set to restore public confidence in it.
“Nigerians should closely watch and follow what we have started and what we will continue to do. I am sure they will not find us wanting”, Daura said.