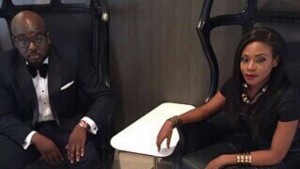 A lot of people have criticized Prince Adegbite Sijuade for deciding to go ahead to exchange marital vows with the love of his life, Dolapo Oni despite the immediate loss of his father, Ooni of Ife.

The couple, who have fixed their wedding on Sunday, August 2, 2015 confirmed their decision to go ahead with the wedding days after the death of the groom’s dad in London.

Prince Sijuade announced his decision to go ahead with the wedding when he shared a picture of himself with his bride and TV personality, Dolapo Oni on Instagram with the caption, ‘#DoliGbi , Sunday August 2nd…  @marcydolapooni.’

The wedding ceremony is scheduled to go ahead in Lagos as planned.