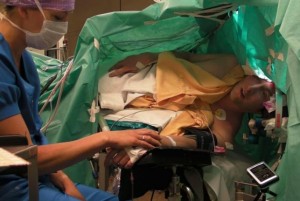 A Slovenian opera singer shared video of himself singing Schubert while undergoing brain surgery in the Netherlands. Ambroz Bajec-Lapajne posted a video to YouTube showing him performing the first and last couplets of Schubert’s “Gute Nacht” while undergoing surgery for a brain tumor so doctors at University Medical Center Utrecht could monitor his ability to sing and recognize the key change. UPI reports:

Bajec-Lapajne trails off about the 2:40 mark, when he said “things start to get very interesting.” “I’m just a singer and tenor at that,” Bajec-Lapajne cautioned in a comment attempting to explain his temporary silence, but “I believe he rewired my brain for a while and that was the result. I could not control my tongue anymore and could not stop phonating. It was a very weird feeling.”

Doctors can be heard praising Bajec-Lapajne’s singing and he is soon able to start again from the beginning. Bajec-Lapajne said the surgery was more than a year ago and he is “doing fine, continuing my professional singing career.”

A patient at Hospital Nossa Senhora da Conceicao in Tubarao, Brazil, starred in a similar viral video earlier this year featuring him playing guitar and singing songs including the Beatles’ “Yesterday” while having a tumor removed.