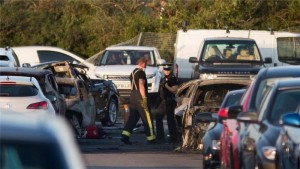 Four people have been killed after a private jet crashed in southern England, reportedly including deceased al-Qaeda leader Osama bin Laden’s half sister and stepmother. The private plane owned by the bin Laden family overshot the runway when trying to land at Blackbushe Airport in Hampshire on Friday morning. The plane crashed into a car auction site next to the airport.

Without confirming the identities of the victims, the Saudi ambassador to Britain, Prince Mohammed bin Nawaf Al Saud, offered condolences on the embassy’s official Twitter account to the bin Laden family, a prominent Saudi clan with vast business interests.

“His royal Highness Prince Mohammed bin Nawaf bin Abdul Aziz, the ambassador of the Custodian of the Two Holy Mosques to the United Kingdom, offered his condolences to the sons of the late Mohammed bin Laden and their relations for the grave incident of the crash of the plane carrying members of the family at Balckbushe airport,” he said in the tweet. Saudi media reported that the family members included Osama bin Laden’s half sister and stepmother.