Oscar Pistorius will only be able to leave his house to go to church when he is freed from jail next week. Oscar who is supposed to be a devout Christian, whose faith is said to have deepened over recent months, must be accompanied on trips to attend mass. 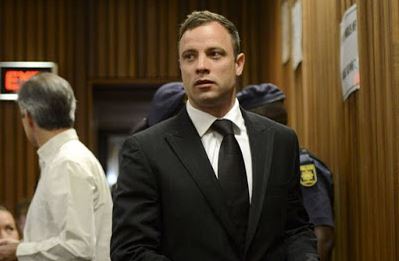 While under “house arrest” at his uncle’s home he will be allowed few visitors, who will have to be approved by the court, and someone will have to shop for him under strict parole conditions the Sunday Mirror can reveal today.

There was an international outcry when it was revealed the Paralympic gold winner will serve just 10 months of a five-year term for killing his model girlfriend Reeva Steenkamp, 29.

During his trial ­Pistorius, 28, was seen clasping rosary beads and intensively reading the book Breakthrough Prayer: The Power of Connecting with the Heart of God, by the Brooklyn Tabernacle Church’s pastor Jim Cymbal.

He is since said to have been studying the Bible.
His release terms mean he will remain a prisoner in his home ahead of an appeal to have his manslaughter conviction overturned.

A mystery donor is said to have offered to help fund the bid, which could lead to a retrial.
A source on the Pistorius legal team said he has been told his release date will either be August 21, 22 or 23.

“The appeal court can’t send him back to prison, they can only order a retrial. Is it impossible? No. Is it likely, also no.”

His team say the appeal is based only on a legal issue and nothing to do with the State’s initial version that he wanted to kill Reeva and that he has an uncontrollable temper.