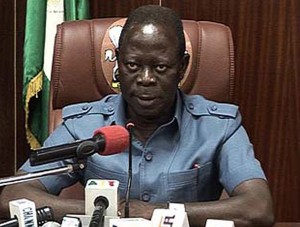 Edo state governor, Adams Oshiomhole pointed out that Nigerians are faring better under the President Muhammadu Buhari administration on Tueday. He went on to observe that in less than 90 days of the All Progressives Congress-led Federal Government, Nigerians had begun to feel the impact of Buhari’s leadership style. Nigerians who are the focus of this statement have reacted and INFORMATION NIGERIA has used its platform to gather their mixed reactions. The reactions are below:

Obinna Fidelis chose to launch an attack on the Edo state governor, saying “Oshiomhole is a fool above 40 and he will remain a fool forever. What is Buhari doing special that GEJ did not do, is it Buhari who fixed the light or repaired the refineries under 4 months of his go slow administration? And yet fools like Osho are supporting him”. Sunday Daniel countered Obinna’s statement saying “Obinna, why was it not working during Jonathan’s regime? I don’t care who started it, kudos to who made it work. Jonathan was too weak to govern Nigeria”.

Ishaku Pofi cautioned Oshiomhole, saying “I’m beginning to wonder whether Adams Oshiomhole is the governor of a state in Nigeria (Edo) or is he the Federal Minister of Information or more appropriately could he probably be the spokesperson for PMB & the APC party. I mean this guy is too talkative & noisy. Can’t he concentrate on governing his state and tending to his people?” Instead of condemning Oshiomhole, Ben Goodman opted to support his claim as he said “Yes, even without saying a word Buhari’s impact is being felt because we are all falling in line due to his disciplined nature. Lets maintain the discipline and Nigeria will be better for it”.

Sani Danjuma Sallau also thinks Nigerians are better off under Buhari, he said “every Nigerian now feel a great change in this Buhari era. He’s not showing any signes of being selective or being tribalistic to any section of the country. Igbos should stop disturbing their head about Oshiomhole being a snoop. He is telling the fact and truth about the development of our great nation Nigeria”.

Oshiomhole was called a liar and a noisemaker by Sunday Omoha Agbo for saying Nigerians are already feeling the impact of Buhari’s leadership style under 90 days. He went on to challenge Oshiomhole to mention one thing Buhari has achieved since his inauguration. A more interesting comment saw Moses Abudu say “I agree with ‘Osho omo ole’, we are feeling the negative impact of Buhari and his destructive government in all sectors of our economy”.

Wind Daniel identified some of the things Buhari has done which has made Nigeria better. He said “at least NNPC has been touched and now petroleum tax force are doing their job enforcing the law; in less than two weeks, petrol will be selling for #87.00 nationwide when all the refineries the president of the federal republic built starts working. God has chosen: pray for our leaders. GEJ fans know this, GEJ is a water yam and he’s very afraid and seeks solace to be able to eat the money he had gathered for his linage. Pray for PEACE”.

Boniface Agabi reacted to the topic saying “Adams Oshiomhole’s mandate ends next year. I don’t know why he is so much in a hurry to take up another appointment, his claims about improvement in electricity supply doesn’t add up to anything, if what we see now at the peak of rainy season is called stable light then we are in serious trouble , if bad governance is associated with GEJ he should remember all the loans he collected before and the present 75m dollars which an Edo child born today will become an adult and pay in 25yrs time he should concentrate on managing his state and leave matters of federal government alone”.