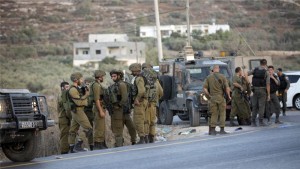 A Palestinian man has been shot dead by Israeli forces after stabbing a border policeman at a checkpoint in the occupied West Bank, the army and Palestinian medics have said. Israeli police on Saturday said the man stabbed a border police officer at the Beita junction near Nablus, and an officer nearby opened fire and killed him.

Abdelhalim Jaafreh, head of the Red Crescent in Nablus, told the AFP news agency the Palestinian man died of his wounds. “He was critically wounded by five bullets. We tried to save him but he died,” he said.

The soldier was lightly wounded after the attack, the Israeli police said. Mahmoud Abbas, the Palestinian president, identified the man killed as 21-year-old Rafiq Taj from Nablus, correcting earlier reports that he was a teenager.

Abbas, in a statement, condemned his killing by the occupation forces, and noted the “dangerous escalation” in the form of “daily killing with no end”. Earlier on Saturday, another Palestinian man was shot by Israeli troops at a West Bank border crossing after stabbing an Israeli soldier, the Israeli army said.

The soldier was treated at the scene and the Palestinian was taken to hospital with a light shoulder wound, the army said. Tensions have soared in the West Bank in recent weeks in the wake of the deadly firebombing of a Palestinian home, attributed to Jewish extremists.