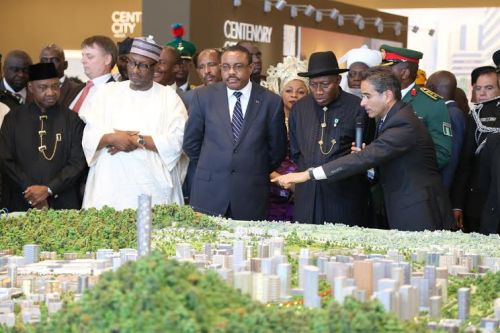 The PDP chieftain, who spoke in Abuja through his lawyer, Kayode Ajulo, alleged that the integrity of the processes leading to the project was questionable.

Ojuigbo was reacting to a report that former Secretary to the Government of the Federation (SGF), Senator Anyim Pius Anyim sued him for maintaining a similar position in several media interviews.

The former SGF, in the N1 billion libel suit filed by his lawyer, Mike Ozekhome (SAN), claimed that Ojuigbo’s allegation was a slander on his person and could scare foreign investors.

Ojuigbo, however, said he had instructed his lawyer to file a counter-suit once he received the court papers.

The PDP chieftain, who reiterated his resolve to ensure that those behind the project, who acted unlawfully, were prosecuted, said he had already petitioned the Inspector General of Police (IGP).
Ojuigbo, who stuck to his gun, maintained that the “processes leading to the Centenary City, were elaborate and conceived to defraud the government and Nigerians”.

His lawyer said he “remains un-intimidated and resolute in his claims and submission that the Centenary City Project is indeed a project devised to trick the authorities into giving a huge chunk of land to only one man under the guise of a Public Private Partnership.

“Our client is resolute about his submissions and would leave no stone un-turned in his bid to bring the full detail of this scam to public scrutiny and ensure that perpetrators of this fraudulent exercise are prosecuted by the law enforcement authorities.

“Indeed, we have the authority of our client to initiate legal proceedings by way of sending petitions to the appropriate authorities as regards the issue.

“It is this that made so laughable and ridiculous, the reports that the counsel to the ex-SGF had initiated legal proceedings against us; we are, therefore, expectant and eager to receive the papers and have our day in court, even as we pursue justice and reparations for victimisation in appropriate quarters.

“We call on the Fourth Estate and the public to remain vigilant and keep these burning issues on the front burner, even as we are confident in the victory of justice and equity, over crime, corruption and dishonesty”.